By “bushmeat” we mean the meat of wild animals intended for human consumption, mainly from the African continent, but also sometimes from Asian or Latin American countries.

While bushmeat consumption is not a new phenomenon, it has grown considerably and globalized in recent years. Various factors, such as population growth, the greater efficiency of hunting weapons or the exploration of formerly inaccessible forest regions have contributed to this strong development. The bushmeat trade, further stimulated by strong demand from urban areas, has become very lucrative. 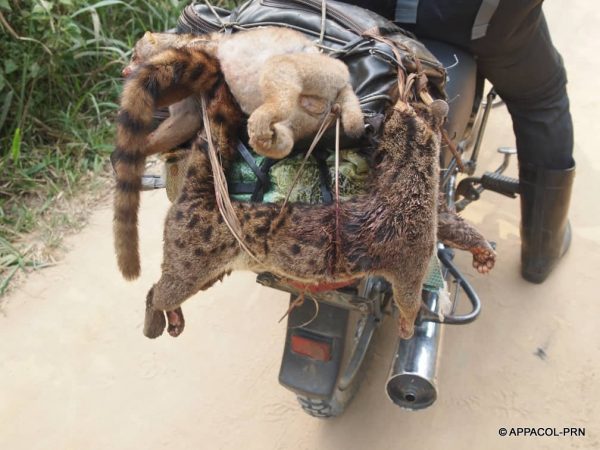 Moreover, this trade has gradually lost its local roots and has been caught up in the movement of globalization: nowadays merchandise can be transported and put up for sale anywhere in the world in a few days. Products that once served primarily for family and community self-sufficiency have become increasingly popular consumer goods on the global market.

The problem is that the current consumption of bushmeat threatens the sustainability of  natural resources. In West and Central Africa, the bushmeat trade reaches FIVE MILLION TONNES every year.

According to certain research (https://www.ncbi.nlm.nih.gov/pmc/articles/PMC5098989/), 1169 of the 4556 land animals assessed worldwide (about 26%) are listed as threatened with extinction. And according to the same study, the order with the most species threatened by hunting for bushmeat are primates (126 species out of 406).

The (international) trade of bushmeat is very problematic mainly because of the threat to the conservation of species and the risk of epidemics:

Hence the importance of raising awareness on a large scale by reaching all social levels, from the poorest hunter to the end consumer. For the preservation of these species, conservation research is essential.

Providing alternative food or income to communities that are unsustainably dependent on wildlife hunting is very important.