We have just had a very emotional day as we have released four rescued animals at the same time!

A few days ago, a friend called us saying she knew someone who had bought a pangolin and who didn’t know what to do with it.

Knowing that these creatures do not stand captivity, we took in the white-bellied pangolin and noticed it had no wounds and was very healthy. The adult male had been bought on the road for USD5; it was going to be eaten… 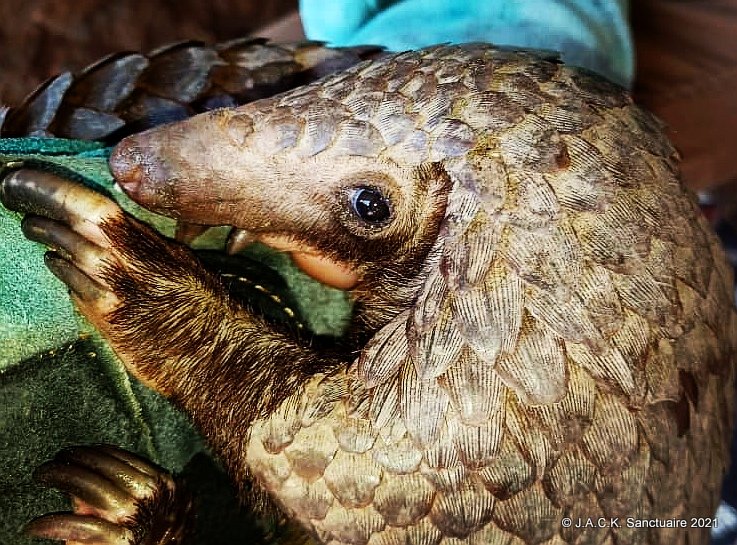 Again, thanks to a good friend of J.A.C.K., Mrs Lisa HYWOOD from the TIKKI HYWOOD FOUNDATION, we provided the young male with the best care. Since he was strong and very active, we decided to make a plan to release him at the soonest!

And this is what we have just done! Mr pangolin is now back in the wild and we are so happy to see him in his environment. The area is a private land. It is secure and there are other pangolins on site!

Since we don’t have very often the chance to drive away from the sanctuary, we decided it was high time our 3 Smith’s squirrels would return to the forest too. They were rescued a few months ago. One was badly hurt and another had skin issues. We successfully rehabilitated these 3 young males and found that they were ready for new adventures in their natural habitat!

The 3 of them simply ran away as fast as they could! I think they were more frightened than excited to be in the forest but I am sure they called one another to spend some time together before starting their new male lives on their own…

As you can see, it was an important day today and we are extremely grateful to the owners of this private forest for letting us giving a second chance to these four beautiful creatures.