Zamba and Doguy are two young chimpanzees of the same age and they haven’t been separated since their arrival in 2007 because they had their quarantine together and then, a few months later they were introduced together into the main group.

Both primates were rescued by J.A.C.K. in 2007. Zamba had been bought in the city of Kamina by a soldier who offered the primate to his daughter. Zamba was meant to become a pet… But DRC Environment officials noticed her and confiscated the chimp from the soldier.  Zamba was in very bad condition when arriving at J.A.C.K. in April 2007 : traumatised and sick, she didn’t want to live any more. She even became blind  but slowly recovered her sight thanks to huge quantities of vitamines, love and care… 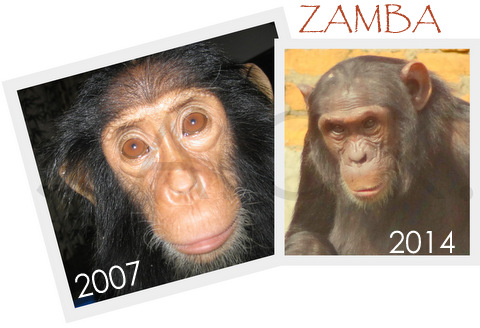 Doguy had been bought by a Congolese Doctor who had seen the little male suffering on the streets of Lubumbashi. Although the doctor knew it was illegal, he bought the chimp to give him all the medical treatments. Once the wounds healed up, the doctor went to see the authorities where young primate was confiscated and handed over to J.A.C.K. in May 2007. 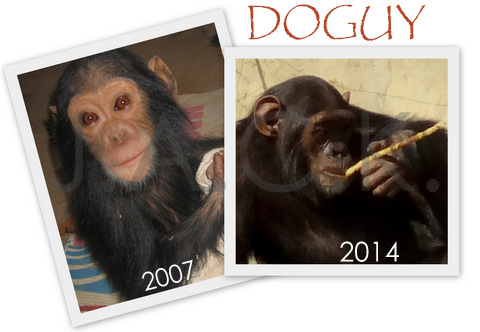 Today, both chimps are still together living in the same group. At the beginning, it was the male who was protecting the female. But since Doguy (male) has had severe eye issues for several years now and because he is now blind of an eye, Zamba, his best friend, is protecting her friend and taking good care of him!

The two apes have become inseparable and it’s like their friendship will last forever!!!