More than 500 wild species are traded and consumed throughout Oceania, South America, South and Southeast Asia and sub-Saharan Africa.

In West and Central Africa, increasing population and trade from rural to urban areas, compounded by the lack of a significant national meat sector, are the main drivers of hunting levels. The estimated annual extraction rate in the Congo Basin is 4.5 million tons per year. Dead or alive, the markets are busy for all types of tastes, all typs of choices.

Bushmeat offers an increased possibility of transmission of several zoonotic viruses from animal hosts to humans, such as the Ebola virus.

In the Democratic Republic of Congo, primates are one of the species most affected by this traffic. Among them the great apes like the gorilla, the chimpanzee, the bonobo and the small monkeys like the guenons and the mangabeys (some are endemic to the DR Congo). 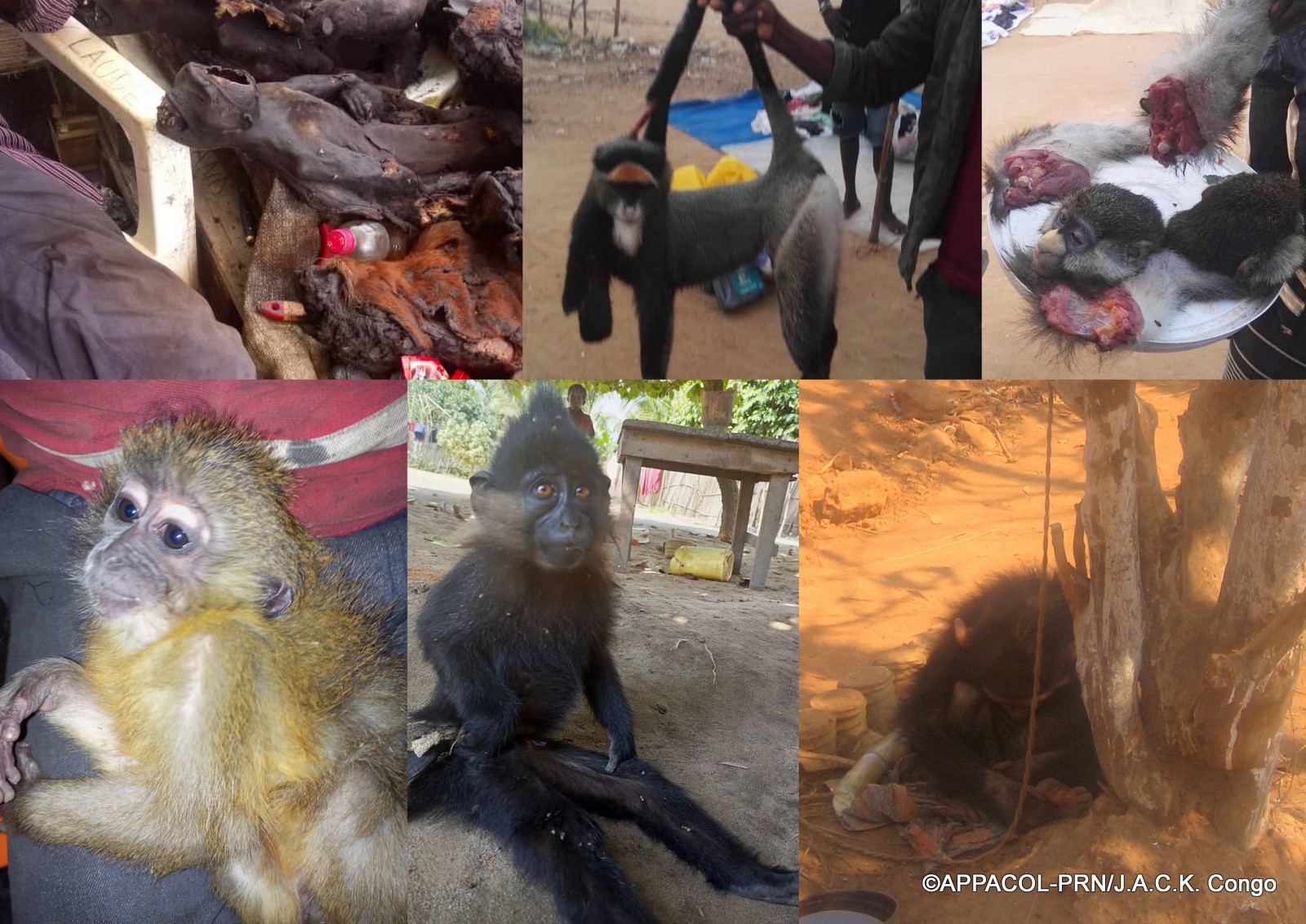 In the Democratic Republic of Congo, and like in most African countries, agriculture provides the necessary resources in calories. However, the meat of wild animals (bushmeat), represents 80% of the protein intake for the local population and plays an important role in terms of dietary diversity. Sadly, increased consumption of bushmeat in cities and abroad and more efficient hunting practices have pushed harvests of wild animals (including primates!) to unsustainable levels.

This persistent consumption leads to the depopulation of African forests and also generates a continued increase of orphans linked to the bushmeat trade.

These little ones become the by-product of the bushmeat trade: the very small individuals are either fattened to be eaten later or are sold in order to supply the parallel trade which is that of the sale of living species  used as exotic pets.

The pandemic (Covid19) was supposed to reduce the consumption of wild products due to containment restrictions. Unfortunately, there is evidence that the health crisis has had no deterrent impact on poachers and that wildlife trafficking has continued (primates, pangolins, elephants, rhinos, etc.).

Hunting also has a strong cultural significance in Central Africa. It is variously associated with rituals and ceremonies, such as circumcision ceremonies in Gabon. It is said some species hunted for bushmeat are believed to have magical or medicinal properties that increase their value. Conversely, taboos on certain types of bushmeat are widespread in parts of Central Africa.

Thus, to reduce the consumption of these species and to stop the illegal trafficking of these animals, it is necessary to raise awareness among local populations about the protection of all these wild species. Education and awareness can reach as many people as possible (see our article on education and conservation:  https://jackchimpscongo.org/2022/05/04/education-et-conservation/).

Extinction is forever! The protection of endangered species and of all the others is a matter  EVERYONE should care about!!